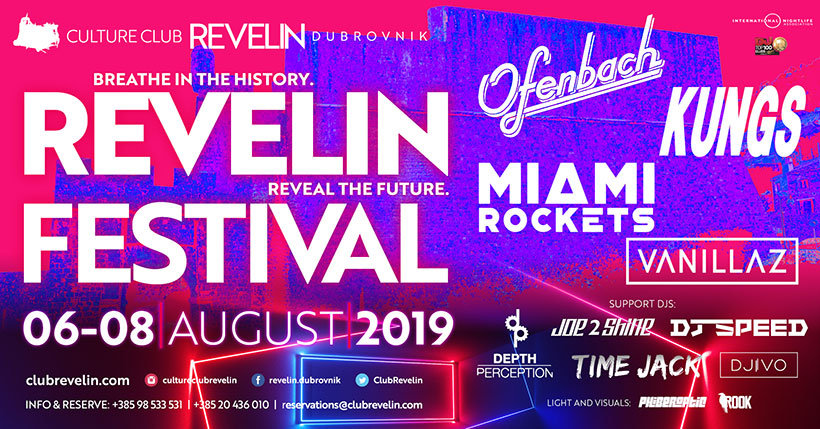 One more edition of Revelin Festival

Revelin Festival has attracted a huge interest in the world of electronic music, clubbing and summer festivals. It is well known for the world-class production and specific location. It’s a great opportunity for clubbing, having fun and dancing during the summertime in Dubrovnik, Croatia. This year Revelin Festival will be presented from August 6th to August 8th at Culture Club Revelin, located in Old Town. If you are looking for the best summer party, we recommend you to visit Dubrovnik on August during the Revelin Festival, therefore nightlife during the Festival will be at very high level. 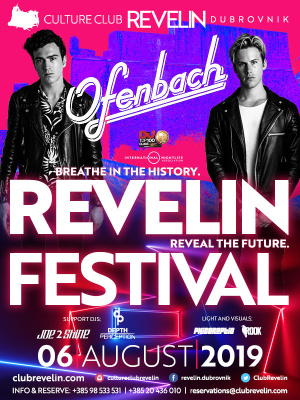 Spectacular Grand Opening of Revelin Festival will be released on August 6th when it is hosting one of the biggest French DJ duo called Ofenbach, supported by Joe2Shine and perspective DJ duo Depth Perception.

Ofenbach is on the world stage since 2014,, and he is recognizable as a perfect partymaker. Some of the best singls are „Be Mine“, „Katchi“ and „Paradise“. Duo Ofenbach is also known for remixing songs from Bob Sinclar, while Joe2Shine is very perspective Croatian DJ producer and one of summer residents at Culture Club Revelin.

Depth Perception is DJ duo from Serbia and that duo is well known by characteristic combination of warming bass lines, percussions, ethnic motives and catchy vocals.

No doubt, first day of Revelin Festival will definitely bring one more amazing and lively night in Dubrovnik. 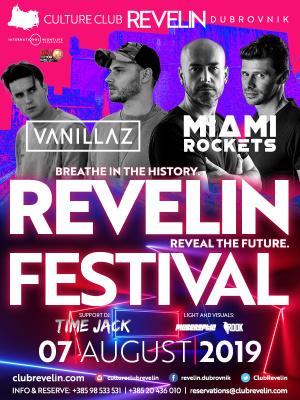 Second day on the stage is reserved for Miami Rockets, VANILLAZ and Time Jack.

DJ duo VANILLAZ consisted of Croatian musician Marko Bucić and Slovenian, Miha Pajk. They are definitely the most successful DJ duo act in Adria region. They have played at many big festivals and venuess across the world such as Ultra Europe, WMC Miami, Kings Day Netherlands, Umagination, ATP and many more.

Miami Rockets are well know in the world of house and deep eletronic music. Their music is regularly found in the set and world’s radio lists “Sidekick“, Their most popular track , was released on Flamingo Recordings and also was on TOP 50 of American Beatport list. Track „ Back 2 Life“ with Kosta Radman was emiting on MTV and received many great reviews.

And last but not least, Time Jack is a perspective resident DJ at Revelin. He has cooperated with almost all superstar DJs. 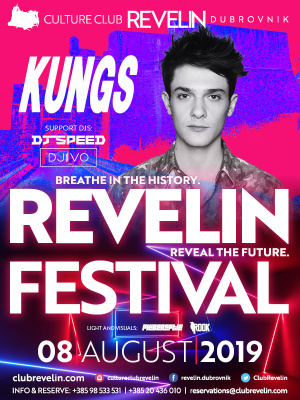 Final Day performers are DJ KUNGS, DJIVO and DJ Speed. KUNGS is a fabouls 23 year old DJ, producer and musician from South of France. At the age of only 20, he opened some performances in Europe at David Guetta’ s Listen Tour.

He has been at the scene for many years, since 2000. These guys will prepare unforgettable experience for the final day of Revelin Festival and leave you with nothing but great memories.

Summertime in Dubrovnik has become more incredible, more attractive and more magic with Revelin Festival. Three days and three nights of pure fun, relaxation and best parties in Dubrovik. Early birds tickets are still on sale, therefore we urge you to hurry up and grab yours.

No Replies to "Revelin Festival - Dubrovnik 2019"