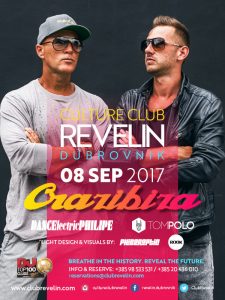 Crazibiza is the new project of two Hungarian musicians Tommyboy and Agebeat.

Tommyboy (aka Tamás Pacziga) is the most famous of the two. He moved back to his home country Hungary from Toronto, Canada in the early 90′s and won the Hungarian DMC Championship in 1993. He then started playing in residencies like Pasha Budapest, the legendary Darkside, Club Home, or traveling to most of the best clubs in Europe, in Italy’s Peter Pan, London‘s Turnmills, The Cross and Ministry of Sound, or El Divino in Ibiza as well as playing with Danny Tenaglia in the legendary Vinyl in New York. Tommyboy is also making waves all over the world with his productions, releasing tracks and remixes on labels like Yoshitoshi, Renaissance, Stereo Records, which are played by major DJ’s from Deep Dish to Danny Tenaglia, Pete Tong, Roger Sanchez.

This guys will rock Dubrovnik 08 September 2017.

Afrojack Knows How to Party in Croatia

No Replies to "Crazibiza are ready for party chaos in Revelin"