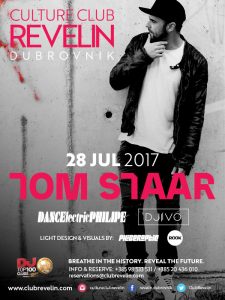 Like a flare into the heart of the global dance music stadium, Tom’s recent remix of African Drop grabbed the attention of every A-List DJ on the scene, gaining heavy support from Swedish House Mafia, Afrojack and A Trak to name a few, and resulting in a flurry of remix requests from each respective camp.

The production guru behind countless killer records, Tom Staar, has refined his skills through a breathtaking number of studio sessions over the past 10 years. From main-room house of Mark Knight and Kryder, to the underground sounds of Hot Since 82 and Moda Records, Tom’s exceptional production ability has positioned him as one of the UK’s most formidable new skool talents … and thing’s are only just started.