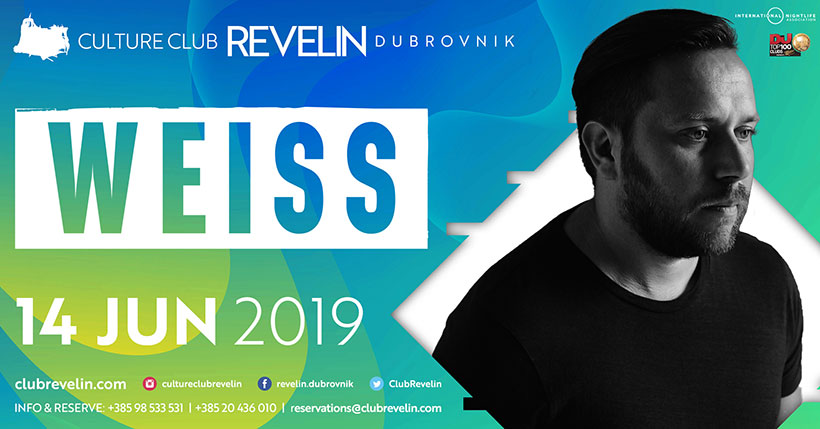 Summer time in Dubrovnik, Croatia is full of life and fun. One of the best world’s nightclub, Culture Club Revelin has made a spectacular line up for June. After a fabulous Summer opening performance of Fedde Le Grand, last Friday French DJ producer Norman Doray was on the stage. This Friday will be reserved for British DJ Weiss. The best party in Dubrovnik is always at Culture Club Revelin.

DJ Weiss is a British DJ and producer. He is specialized in classic House Music, but has been doing very well in commercial dance tunes as well. His single „My sister“ hit the top of Beatport Charts in 2013, and soon after he started to get even more opportunities. Until now, he has cooperated with Kylie Minogue, Robyin, Calvin Harris, Claptone and many more. His single „Feel My Needs“ was number one on 5 International music charts and was also voted as the best single of 2018 by DJ Magazine „Best of British Winner“. DJ Weiss has confirmed over one hundred shows throughout 2019, including Ibiza, Miami Music Week, ADE, Eletric Zoo and of course – Culture Club Revelin.

For sure he will prepare a fantastic dance atmosphere and one more unforgettable summer night. Tickets are available on our official website, as well as booking VIP tables. We urge you to hurry up if you don’t want to miss the show.

Norman Doray has Astonished the Audience

No Replies to "WEISS is Performing at Culture Club Revelin"