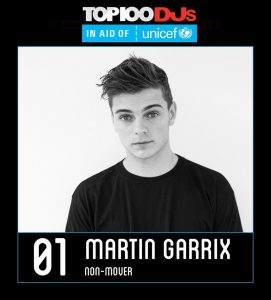 Martin Garrix has been revealed as the winner of the DJ Mag Top 100 DJs Poll 2017, with the 21-year-old Dutch superstar retaining his title after becoming the youngest ever No.1 DJ last year.

Garrix was awarded the No.1 trophy by recent musical collaborator and EDM superstar, David Guetta, on stage at the Top 100 DJs Poll award ceremony at the Amsterdam ArenA. The event took place at this year’s Amsterdam Music Festival at Amsterdam Dance Event (ADE).

There’s still a smattering of hardstyle DJs in the hallowed hundred, and Angerfist has had to surrender his Highest Hard hat to Headhunterz, who has returned to the hardstyle scene after a spell exploring more mainstream music.