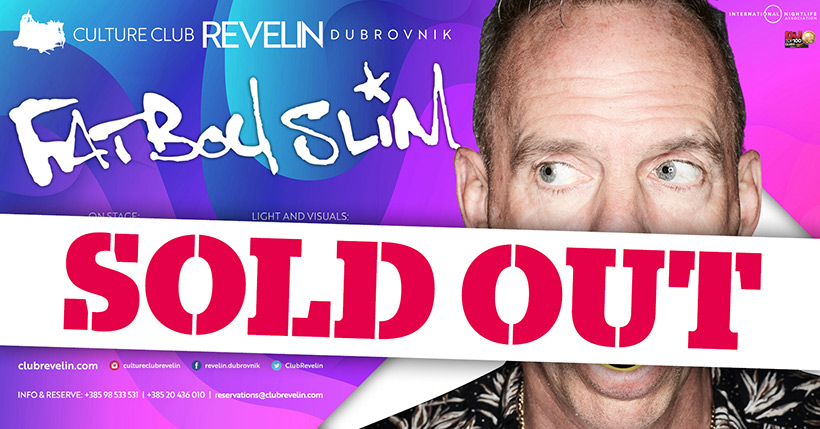 The news that shouldn’t surprise anyone is that Fatboy Slim sold out his concert at Culture Club Revelin in Dubrovnik, Croatia. Thank you so much for the overwhelming response to this event.

With hits like “The Rockafeller Skank”, “Eat, Sleep, Rave, Repeat”, “Right Here, Right Now” and “Praise You”, Fatboy Slim is one of the most renowned DJs of this era. He has won Grammy Award, ten MTV Video Music Awards and two Brit Awards. Also he holds the Guinness World Record for the most top 40 hits under different names.

The worlwide famous, Fatboy Slim for sure will prepare a spectacular atmosphere and one more amazing night at Revelin Club. Very soon after this show, with the begining of August, exactly on August 6th is starting a Revelin Festival.

Spectacular Grand Opening of Revelin Festival will be released on August 6th when it is hosting one of the biggest French DJ duo called Ofenbach, supported by Joe2Shine and perspective DJ duo Depth Perception. Some of the other performers are Miami Rockets, Vanillaz and Kungs. So, If you are looking for the best summer party, we recommend you to visit Dubrovnik on August during the Revelin Festival, therefore nightlife during the Festival will be at very high level.

Fatboy Slim has Amazed the Audience

No Replies to "Fatboy Slim Sold Out Concert at Revelin Club"